More than 100 academics are urging the government to drastically alter C-51, the Conservatives’ proposed anti-terrorism legislation, arguing it is far too broad and doesn’t come with safeguards to protect Canadians’ privacy rights.

The group, made up mainly of law professors from across Canada, have signed an open letter arguing the proposed bill has major problems that threaten Canadians’ privacy and freedom of speech.

The legal experts also take aim at the government for cutting off debate on the legislation.

“In light of the sweeping scope and great importance of this bill, we believe that circumventing the ability of MPs to dissect the bill, and their responsibility to convey their concerns to Canadians at large … is a troubling undermining of our parliamentary democracy’s capacity to hold majority governments accountable.

“It is sadly ironic that democratic debate is being curtailed on a bill that vastly expands the scope of covert state activity when that activity will be subject to poor or even non-existent democratic oversight or review.”

The letter lays out five primary concerns and a number of secondary concerns, calling the bill “a dangerous piece of legislation.”

Risks making Canada less safe
The question is whether C-51 will make Canadians safer or whether it might inhibit the work done by intelligence and law enforcement officials, said University of Ottawa Professor Craig Forcese.

In an interview with CBC Radio’s The House, to air Saturday at 9 a.m., Forcese says the bill chills speech, deters participation in counter-violent extremism programs and sets up a “brave new world in terms of what the Canadian Security Intelligence Service (CSIS) can do.

“All this conducted in an environment where indisputably our review system is in tatters,” said Forcese, who is one of two law professors on whose work the open letter is based.

“To put all of this together and put it all in play at present means that we risk another series of mistakes and intelligence failures and scandals,” he said.

“I think on balance it risks making us more unsafe.”

Self-defeating
The government says the powers in C-51 are necessary to keep Canadians safe, and points to the requirement for judges to sign off in advance of CSIS breaking Canadian law, arguing that is adequte oversight for the new powers. 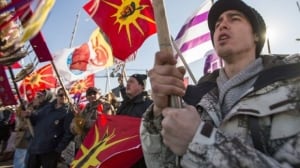 Critics fear the government’s proposed anti-terrorism legislation could ensnare protesters, like those who marched with Idle No More in January 2013. (Geoff Robins/Canadian Press)C-51 would give government departments and agencies vast information-sharing abilities with no enhanced protections for privacy.

Combined with the “exceptionally broad way” in which “activities that undermine the security of Canada” are defined, the academics fear the bill is a “deep and broad intrusion into privacy.”
The bill also broadly criminalizes advocating or encouraging terrorism offences in general, which could be counter-productive, the letter says.

“De-radicalization outreach programs could be negatively affected” because those programs depend on frank discussions between the RCMP, communities and parents of those at risk of radicalization, the academics wrote.

“The RCMP may cease to be invited in at all, or, if they are, engagement will be fettered by restraint that defeats the underlying methods of the program.”

“What C-51 now does is turn judges into agents of the executive branch (here, CSIS) to pre-authorize violations of Canadian law…. This completely subverts the normal role of judges.”

NDP protest committee vote
Meanwhile, the New Democrats are calling on House of Commons Speaker Andrew Scheer to rule on whether the Conservatives overstepped their bounds in forcing a vote on the bill at the public safety committee Thursday night.

The move put an abrupt end to debate over an NDP proposal that would see the committee hold up to 25 meetings before the March 31 deadline set by the government for moving the bill to the next stage.

After initially proposing the committee devote just three days to expert testimony, the Conservatives put forward a compromise on Thursday to hold up to eight hearings, which was ultimately adopted by the committee over the objections of the opposition.

In his appeal to the speaker, NDP House leader Peter Julian contended that, by overruling the chair — Conservative MP Daryl Kramp — after he ruled a motion to call the vote inadmissible, the government exceeded the broad parameters for autonomy generally enjoyed by House committees as masters of their own destiny.